The Motley Fool Deutschland » Uncategorized » What Warren Buffett Will Do With Berkshire Hathaway Inc.’s $55 Billion in Cash

Berkshire Hathaway (ETR: BRH)  has filed its latest 10-Q with the SEC , and one bit of insight reveals what Warren Buffett will do with some of the company’s $55.5 billion cash-pile.

Remarkable growth
As a result of the $12 billion acquisition of Heinz that closed during the second quarter of 2013, Berkshire Hathaway saw its cash dip from $49 billion to $36 billion. But thanks to its remarkable lineup of businesses, nearly $20 billion worth of cash has been added to its books in just one year: 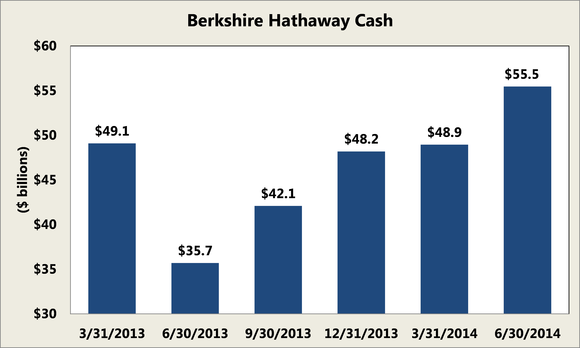 Buffett has said that „we will always maintain supreme financial strength, operating with at least $20 billion of cash equivalents.“ I guess that extra $35 billion is just a cherry-on-top.

The natural question then becomes, what on Earth will he do with it?

All signs point to the The Oracle of Omaha pouring a large chunk of it back into the businesses that make up Berkshire Hathaway.

Reinvesting in proven winners
The filing covering the first six months of 2014 showed that Berkshire Hathaway’s railroad business, Burlington Northern Santa Fe Railway, and its energy and utilities unit had $4.6 billion in combined capital expenditures, which are the purchases of property or equipment related to the daily operations of the business.

The report also noted that the two businesses „forecast aggregate capital expenditures of approximately $6.9 billion over the remainder of 2014.“ A little back of the envelop math indicates the company will reinvest a staggering $11.5 billion into just those two businesses this year.

And that says nothing of the other businesses that make up Berkshire. Total cash spent on capital expenditures for Berkshire Hathaway as a whole stood at $6.1 billion though the first six months of the year. This was up 30% from the $4.8 billion spent through the same period last year.

Impressive delivery
Why is Buffett investing so heavily in his own businesses?

I’ve discussed both the energy and railroad operations of Berkshire Hathaway before, but in short, Buffett understands that while these investments are costly, they can also deliver great returns.

Although BNSF Railway has had some rough patches so far in 2014, thanks to weather issues and a number of other difficulties that Berkshire is „working diligently,“ toward fixing, Berkshire Hathaway Energy has seen profit rise by 12% to stand at $1.3 billion for the first six month of the year. Even with the 3% dip in BNSF Railway earnings, total profit from these two businesses combined has grown by $100 million since the same period of 2013.

How this impacts Berkshire’s long-term outlook
Of course, a large chunk of the cash on hand at Berkshire Hathaway is likely earmarked for acquisitions, but the reinvestment efforts within Berkshire may end up being equally as important to the long-term success of the company.

While it may grab less attention and be less fun than imagining Buffett’s next huge buyout, reinvesting in a consistently profitable business appears to be exactly what is needed to sustain the company’s impressive returns. After all, in total, earnings at Berkshire rose by nearly 9.5% through the first six months of the year to stand at $15.5 billion.

This article was written by Patrick Morris and originally appeared on Fool.com on 5.8.2014.